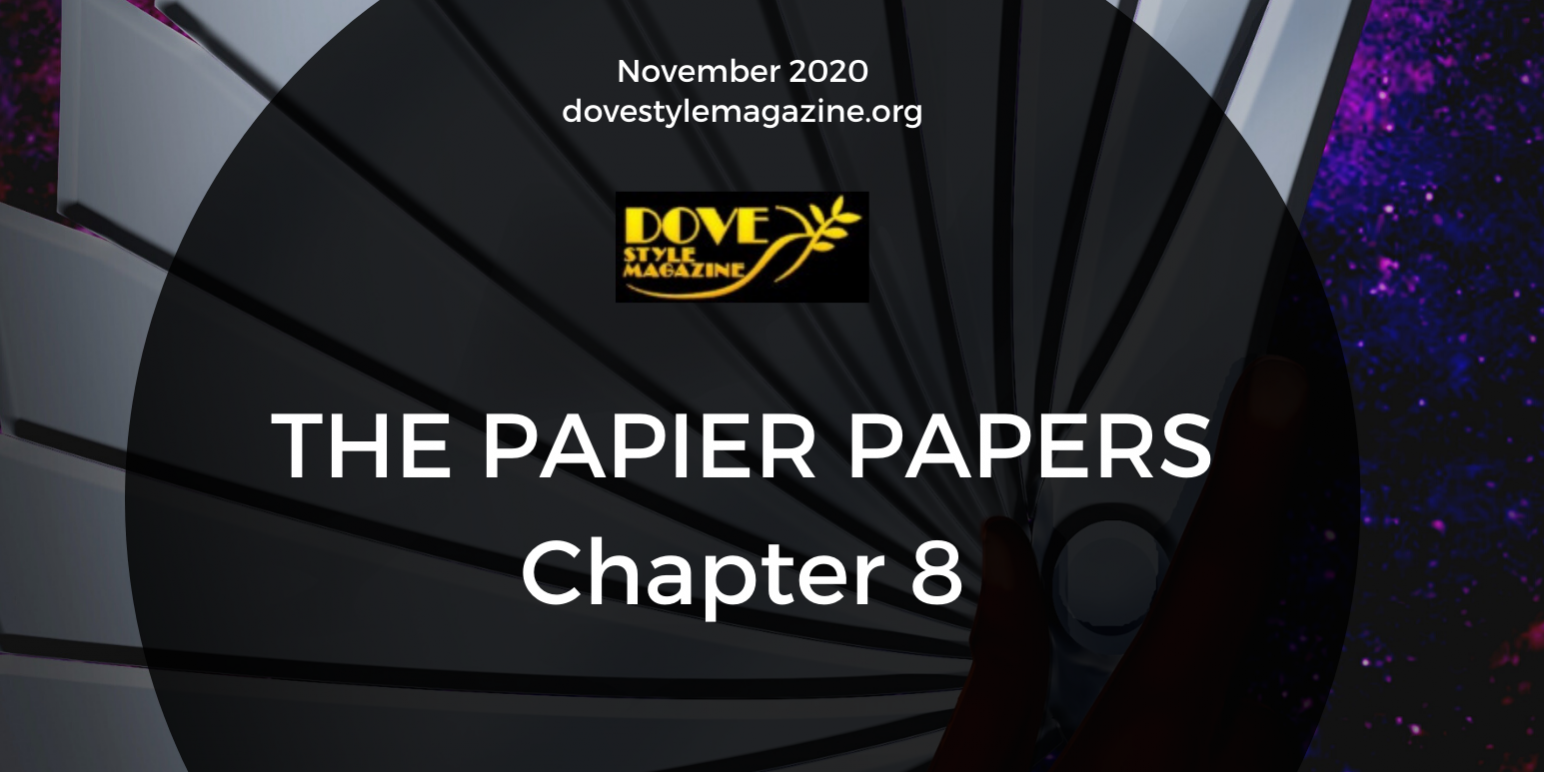 Previously: John and Kari Papier listen to Paul Papier’s explanation for why he had to leave Fahldan, but the adults have no idea where the dimensional Myst has taken the children, Jaak and Jaan. The kids themselves have learned that they have a part to play in a prophecy that tells of Fahldan’s restoration and the re-balancing of the dimensional planes.

Chapter Eight: Our Moment of Discontent 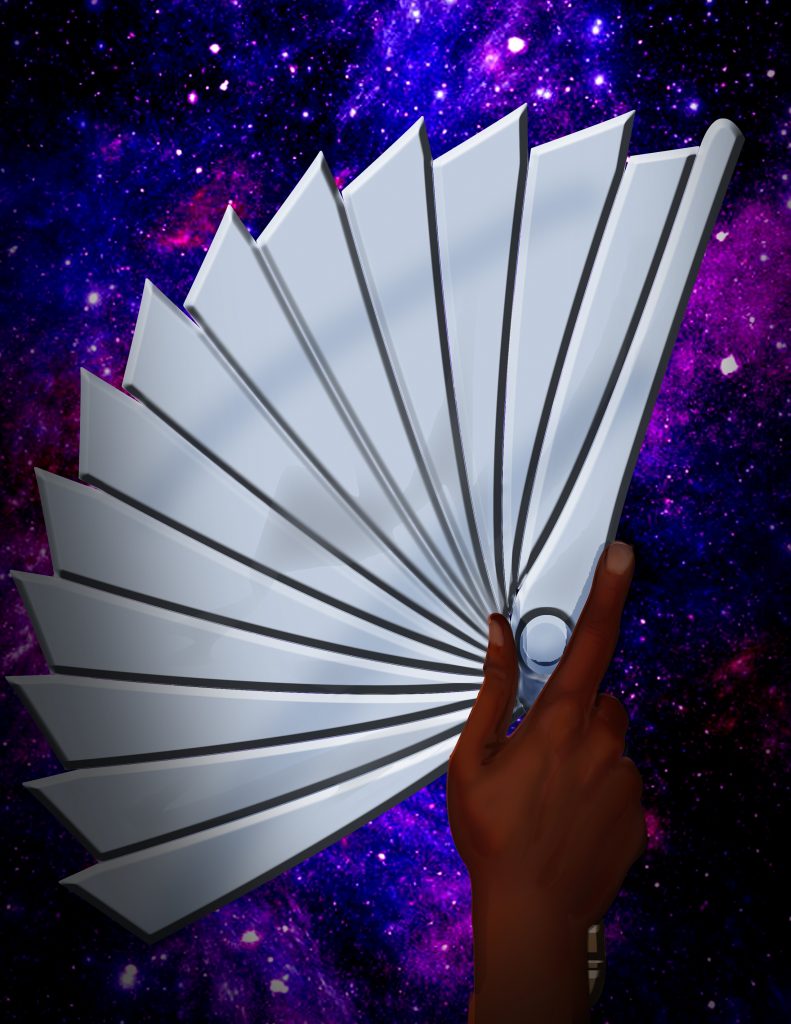 Jaak cleared his throat. The dissenting argument among the Peikwa had died down to murmurs among the group gathered around the children. The light above the cloud cover was dimming, the sun was beginning to set. The ash-covered boy in his pajamas needed to get his equally clad and covered sister to shelter and a bath. Their tumble on the burned-out ground left them as disastrous in appearance as their attempt to ride a wild leafray to a more hospitable place than the scorched ruins of Honor Alley. There was a faint ringing in his ears that had been continuous since he and his sister had spilled out of the Myst and landed on the strange leaf-scaled creature they tried to use as transportation.

The Peikwa gave him their attention – some of them grumbling. The Hauntess quieted the group as Quwee looked menacingly about them.

“My sister and I look a mess. I don’t know how you all manage to remain ash free, but we could use a bath. Don’t the Peikwa have a headquarters we can go to?”

The question started another round of mumbles and snorts around the gathered ash-ninjas.  The main voice of ill-content jeered disrespectfully at their leader.

“Tell him, Kweg, Tell the boy why we are out here like a pack of whipped snouts.”

Quwee seemed about to do violence to the man, but a look of sorrow passed across his rugged face and his hand relaxed its grip on his folded fan. Before Quwee could speak, Jaak pointed directly at the loud-mouth.

The man looked back at Quwee and glared with disdain.

“Mobiwyte and the LOA had been turning the people against the Peikwa. We continued to try to keep the peace after the Gates where destroyed but that was where a lot of our resources came from. We couldn’t barter with Other-comers anymore. What we had after the blight hit our food stores began to run out. People were starving. The LOA continued their activities even after Mobiwyte was gone. The first to go missing were the alone and fringe-livers. Then the travelers that couldn’t get back to their Otherplaces because the Gates were down, began to quietly disappear. The Hye, who had been making the best living from the markets and trade through the Gateways, were living better than the majority of the population, and most of them had no intention of sharing with those that were suffering. The ones that tried to help eventually ran out of their own resources. The Hye needed protection from the gathering mobs that intended to storm their castles. They offered food to anyone willing to stand between them and the starving people of Fahldan.  We Patrolmen became the villains in their eyes because we kept the Hye safe from attack – just doing our duty. The LOA, the cause of it all, never ones to miss an opportunity, had put a bounty on our heads claiming this was all our fault – fault the destruction of the Gateways, the death of Aegus and Mobiwyte, the disappearances, the cannibal gangs- somehow, we became the enemy despite evidence to the contrary. So, the people we protected turned on us. They burned down our quarter, attacked us, killed us, probably ate us. Some of us defected to the Hye’s offer.” He pointed along the horizon. “It’s a dangerous, broken world out there for us now. We’ll run and hide in the ruins and ash while the LOA hunt us and blame the disappearances of Fahldans on us. They say we are the cannibal gangs that they themselves started under Mobiwyte. We are guilty by association because The Whale was one of us. Anyone caught helping us is taken and put to death – and I’m sure they are turned into food. Neighbor turning against neighbor, family against friends – just for the scrap of crumbs … just to lick the grease from the Hye’s plates!”

He turned to look Jaak up and down, then walked a line facing the seated and kneeling Peikwa.

“And yet, we are the devotees of duty! Hated, hunted, disliked and mistrusted! Following a failed leader and a dream witch! Who expects us to place our lives in the hope that these lost children will bring about the turn of fortune needed to save all of Fahldan? They can’t even ride a leafray!” He turned back to Jaak red with anger. “So, no, ‘little warrior’, we have no place for you to bathe!”

“Yes, you do, Perath.” The Hauntess spoke calmly. “You would not be here otherwise. None of you would be.”

Perath scoffed. “You don’t know me, witch! Quwee may believe that act you play to keep yourself alive – you may have bewitched him, but I’m not a blind man!”

“Then how is it that you do not see the truth of their existence?” The Hauntess gestured at the children.

Perath’s stomach growled loud enough to be heard feet away.

The Hauntess looked at him sadly. “Perhaps it is not your eyes that you follow. I have seen your life, Perath. I know why you joined the Patrolmen. You were not an orphan. You wished to make up for the life of drink that ruined your home and family. You were Hye. When you lost your fortune, you were forsaken. The Peikwa took you in and you used them to try to bring meaning back into your life – to have family again.”

“Fairy tales are not the answer! They will not put food in our belly’s! Yes, I was Hye, and I know how they think! They only care about themselves! They back the LOA now, and as long as they do, we are going to suffer until there are none of us left!”

Perath glared at the children, then stalked away.

“Listen to me!” Quwee shouted to the group. “We are at the beginning of the turnaround. The Hauntess said the children would come – here they are. But that is not where the story ends. We have to make sure that they reach their goal. We have a duty to play in this. We are the people that united Fahldan so that we could be the hub of the gateways to Otherplaces. We will be the ones to start it again. The people will openly embrace us again. Once the Gateways are open again, we will be able to call on our other brothers across the Myst.”

“How long will that take, Kweg?” a voice asked from the group. “How many of us will be left to see that day?”

“I don’t know, brother. As long as one of us survives, the mission must continue. We do not back down from danger – we go toward it. We are honest. We are brave. We are sharp. We are kind.”

“We do not back down from danger – we go toward it. We are honest. We are brave. We are sharp. We are kind.”

His men looked up at him and he eyed then one by one.

The men began to join in their oath. Louder and more confidently each time.

“We do not back down from danger – we go toward it! We are honest! We are brave!” Quwee unsheathed his fan and snapped it open. He thrust his fan in the air. “We are sharp! We are kind!”

His men did the same, thrusting their open fans into the air.

“We do not back down from danger – we go toward it! We are honest! We are brave! We are sharp! We are kind!”

Jaan joined in at the welcome of Hauntess, thrusting her little hand with fingers spread wide, high as she could, signifying a fan. Jaak noted that Perath did not participate in the oath-speaking. He sat in the rear mostly obscured by the Peikwa on their feet now, repeating their oath with renewed confidence.

At the Papier mansion in Earth’s dimension, Jaak and Jaan’s room had nearly equalized to the atmosphere on the other side of the dimensional tear. The Myst was not undulating through the opening as profusely as it had been. Jonah could see through the containment door’s porthole that the Myst was settling down to about calf level. He surveyed the rooms disheveled contents. Books, papers, toys, clothes – some spilled over the table and desk, a pile of leaves next to Jaak’s bed.

“What in the world?”

Kari stepped next to him wanting to see into the room. “What? What’s wrong?”

“That wasn’t there before,” Jonah said with confusion. “There’s a pile of leaves in there.”

Both Kari and Paul exclaimed at the same time, for different reasons, “What?”

Before Jonah could answer, the pile of leaves moved and he jerked his head back in surprise.