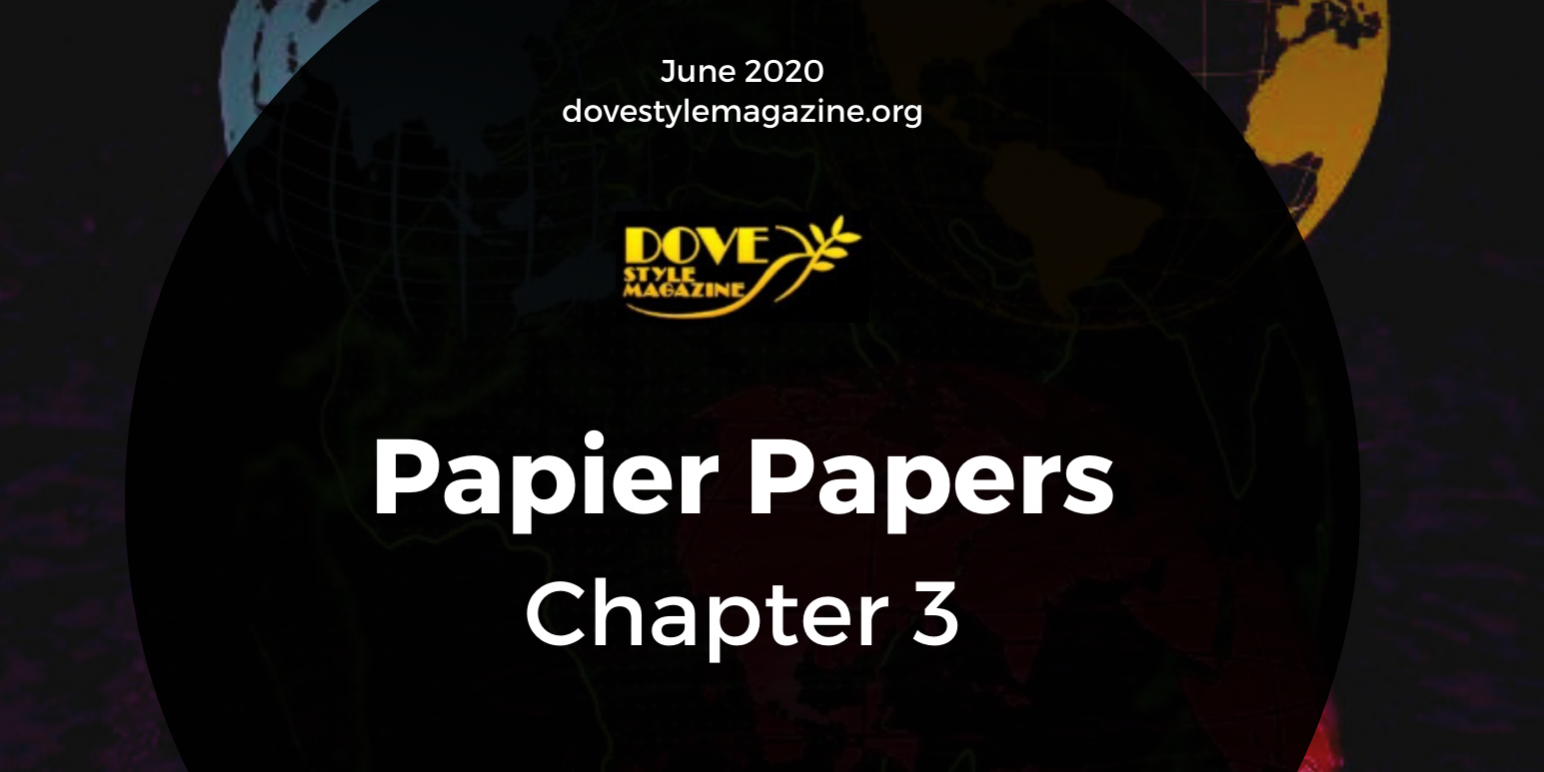 Previously: While waiting for the atmosphere between the Earth and the Otherplace to stabilize, Jonah and Kari Papier try to pin-point where their children, Jaak and Jaan, have traveled to through the Myst that separates the dimensions. But the strange phenomenon of disturbances along the Ley-levies that barrier the dimensions bodes a catastrophic event for the planet as the other dimensions begin to converge.

Chapter Three: A Cloud of Dust 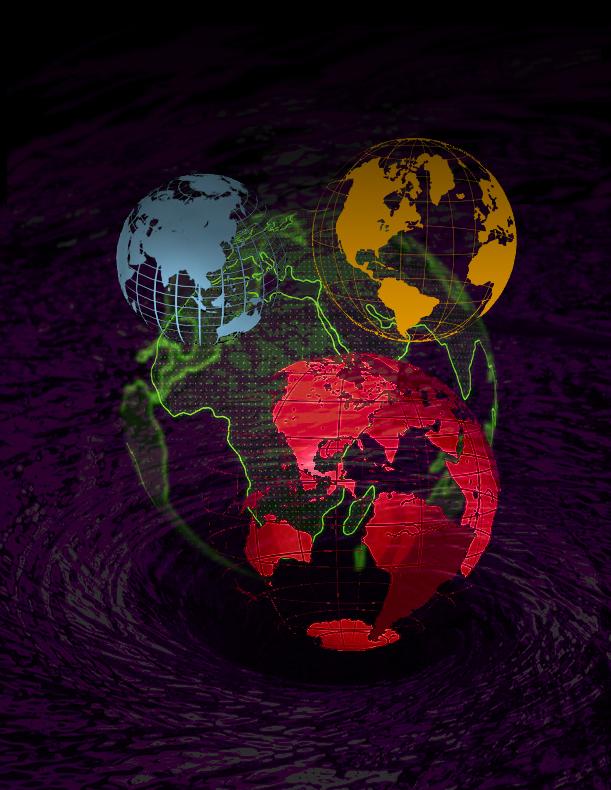 On the second floor of their sprawling mansion, Jonah peered over his wife’s shoulder at the PAD she was using to correlate the data they had available to them on the possible whereabouts of their children.  On top of the kids’ disappearance, presumably down the dimensional rift of Myst that opened in their room, the PAD’s data revealed a new danger.

“How can the other dimensions be converging on us, Kari?”

“Right now, your guess is as good as mine, Jonah.” She tapped the screen to show a simulation of eclectic shapes slowly moving toward a representation of Earth. “The Otherplaces have always moved around Earth’s dimension – sometimes touching at places, making a Ley-levy thin enough to pass through, but still able to hold as a barrier that prevents an Otherplace from spilling into ours, and the reverse. Other dimensions have always been rubbing against the Levies, now they’ve started to bump against them.  But when they start pushing against them, something is going to give. Unless we can stop them or redirect them.”

“We don’t have anywhere near the technology needed to manipulate entire dimensions anywhere on the planet – what in the world could power something like that, K?”

“The sun maybe?” Kari shrugged. She stepped to the porthole that allowed her to see into her children’s room separated by the containment door her husband activated to keep the Myst from continuing to spill into their dimension as the two places tried to equalize their atmospheres. She looked over her shoulder toward her husband. “Earth won’t survive. We’ll have to relocate.”

“You mean go wherever the kids went.”

“We were planning to anyway, weren’t we?”

“One of us was going after them, sure – to bring them back.”

“We may need to pack heavy and quickly, J. I don’t know how long we have until the effects of the convergence becomes disastrously apparent to the whole planet. Right now, it’s the weird storm phenomena with the latent lightning – just atmospheric. Eventually, it will become seismically tectonic. Jonah, the Otherplaces aren’t just converging on Earth – they are converging here. We’re at ground zero. The rift in that room will be our only hope of survival. There’s no time to call anyone else or set up mass evacuations.”

“We don’t know where the kids are yet, K. If we try to follow them blindly, we could end up lost ourselves. Without a Gateway-world to provide stable portals, we’d never be able to get to another dimension to search for them. We have to wait and pray that the equalization in there doesn’t take much longer.”

Something shifted in the Myst that thickly writhed on the floor of the sealed room. Neither parent was looking through the porthole to see it.

Honor Alley was once a beautiful and vibrant place. It was the hub of dimensional travel. It was the glorious Gateway-world and once bustled with activity, trade, and entertainment. Now it looked like a burned and pitted battlefield. At least the part of it that the Papier children were seeing around them looked that way. Even the wildlife had been changed. The leaf rays described in the stories their parents told them were bright and warm-colored. Those that were around them were dull earth-toned. They looked like piles of dead leaves left in the sun and elements too long. The trees in the distance were charcoaled and burnt. No leafage sprouted from the branches. The patches of spotty grass were dry and dead. There was no hint of moisture in the air, but somehow there was a fog rolling across the ground in the near distance, and a slight acrid aroma on the wind. The gray cloud-cover blocked the sun, making the temperature on the cool side, but not alarmingly so. The thermal pajamas the children were wearing was proving to be adequate protection.

“Right now, the only option we have for transportation is a leaf ray.” Jaak remarked to his sister. “Do you remember Mom or Dad saying anything about how to ride one of them in their stories?”

Jaan shook her head. Jaak knew of she didn’t recall anything about how to coral a leaf ray in the wilds of its native land, then it mostly likely hadn’t been spoken of.

Jaak’s initial idea was to call for the leaf ray the way you summon a dog. But since he didn’t know if the thing was male or female, calling “hear boy” repeatedly didn’t make a lot of sense. Looking at it, he couldn’t tell if it even had ears – or eyes for that matter. It looked like a pile of dead leaves. Could he lure it? They don’t have visible claws so it couldn’t grab anything for food, or pull anything apart to get at food. Maybe it was like a frog, with a sticky tongue – which would mean it probably ate insects or small stuff. Since some insects pinch, sting, or are poisonous on Earth, he didn’t want to try his luck with one in a place he really knew very little about. He looked at the other leaf rays around the area, they were definitely coupled – maybe they were grazing. The one he and his sister had fallen on seemed to be alone.

“Maybe the direct approach…” Jaak sighed. He steeled himself to slowly walk up to the native creature and reflexively spoke soothingly at it. “Easy boy. I don’t want to hurt you. I hope you do want to hurt me.”

He shushed his sister back to keep her out of the way in case the leaf ray charged him. Surprisingly, it let him approach without reaction. He knew that getting under the scales irritated it, so he decided to test what would happen if he rubbed along the surface of the scales in a petting motion.

Getting no reaction at all stumped Jaak as to if petting it was good or indifferent. After a moment he motioned for his sister to join him beside the leaf ray. Jaan hesitantly joined him in petting the thing they were about to mount.

Jaak knelt down and motioned for his sister to climb on his back, her arms around his neck and legs around his waist. He gingerly straddled the unmoving leaf ray. Once he was sure Jaan had a good grip on him and was settled safely, Jaak took a deep breath, and pulled back on the leaf-shaped scales.

The leaf ray took off. It’s initial burst of speed took Jaak by surprise and his head whiplashed back, but he managed to keep hold of the animal’s scales. Unfortunately, his reflexive tug on the scales to keep himself seated with his sister’s legs wrapped around him, also caused the leaf ray to buck again and accelerate even faster. Jaan squealed. They careened erratically about the area.

“Hold on tight, Jaan!” He felt his sister’s legs and arms constrict more firmly around him.

Jaak tried to direct the leaf ray by alternately pulling on the scales in the grip of both his hands, but the leaf ray invariably veered back toward the spot where they first landed out of the Myst. The leaf ray swerved tightly, creating a strong centrifugal pull that nearly threw Jaak and Jaan from its back, but the boy’s grip on its scales made it correct course to alleviate the irritation.  Their crazy directional struggle took them to an area that had no dead grass at all, but where Jaak thought was fog, it looked like a vacuum cleaner’s dust bag had been emptied about the landscape. A cloud of fine gray flakes billowed up around them as they zoomed with even more intensity back and forth across the land. The kids began to cough as they breathed in the tasteless flakes. Jaan buried her face in her brother’s back and tried to hold tighter. Jaak’s eyelids fluttered like a hummingbird’s wings as the dusty flakes got into his eyes. He was forced let go of one scale to wipe at his face. Just as he did, the leaf ray bucked and twisted in the air. This time it was successful in dislodging the children.

Jaak and Jaan tumbled off the back of the leaf ray and sprawled on the ground, kicking up a big cloud that added to what was already floating is the air. Trying to fan away the paled airy obstruction, Jaak snapped his head back and forth, his eyes squinted, looking for his sister.

Jaak’s heart pounded with worry that his sister had been injured when they fell. The cloud of flakes was beginning to dissipate, but it clung to him unlike any dirt he had ever seen. He imagined that he looked like a clay sculpture of himself as every inch he could see of his body was covered in the flaky dust.

He was beginning to see a form in the cloud. It was on the ground. He thought it might be his sister, until the shape began to grow. It grew until it was much taller than he was. The shape made a motion and the cloud separated in a gust to reveal a cloaked man, dusted with the remnants of the cloud, a huge Japanese-style fan was open in the hand that had swiped through the air. Jaan was on her back at his bare feet, which were covered in the dust up to his shin. Jaan was covered in the clingy dust. The man unhooked the cloth covering his mouth and gave Jaak a crooked smile.

“Well, well. look what the leaves dragged in.” he said with a thick growling voice. The fan in his hand collapsed into a single blade about the length of his forearm. “Looks like we’ll have a little meat tonight men!”

As the last remnants of the dust-cloud settled back to the ground, Jaak could see that the man was not alone. There were four other people, all astride their own leafrays a few paces behind him.

Jaak gasped at the sight of them and heard his father’s voice in his head, “Pirate chefs and hungry snitches.”