Editor’s Note: The views and opinions expressed in this article do not necessarily reflect the owner and publisher of Dove Style Magazine or its editorial staff. 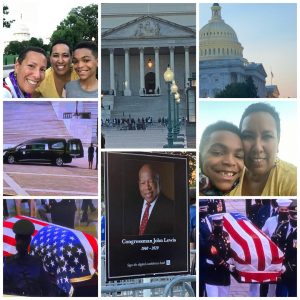 As the life and legacy of the late Civil Rights icon and United States Congressman John Robert Lewis was remembered and celebrated over a span of days during the last week in July, I had the privilege of having my oldest grandson Caden (age 11) spend a few days with me at my home. As I was watching the extensive coverage of Lewis’ tribute at the U.S. Capitol by his esteemed colleagues, Caden sat down beside me and asked what I was watching. I answered his question and then took the opportunity to share with him about Lewis’ life and the many sacrifices he had made to obtain racial equality and the right to vote for African-Americans. I could have easily allowed him to continue playing his video game, but I felt it was critical for him not only to learn about John Lewis’ life, but how what he fought for dating back to the 1950s and 60s will benefit him once he reaches the age to become eligible to vote.  I then told Caden that I was taking him to the Capitol so we could pay our respects as a way to show our gratitude for the Congressman’s life’s work. It was an amazing experience and one I’m sure he’ll never forget.

I shared with him that John Lewis was only 23 years old, just 12 years older than himself when he spoke before hundreds of thousands of people during the March on Washington on August 28, 1963, the same day that Dr, Martin Luther King, Jr. delivered his infamous I Have a Dream speech. I wanted to drive home the message that although John Lewis was a young man, he didn’t allow his age or race to discourage him from taking a stand for social justice and righteousness. He served as a founding member of the Student Nonviolent Coordinating Committee and was instrumental in coordinating and mobilizing thousands to attend the historic march that ended at the steps of Lincoln Memorial in Washington, DC. Therefore, I wanted Caden to know that he’s able to do the same today … to stand up for what is right and be bold enough to call out racism and other social injustices. This is what John Lewis meant when he said, “Do not get lost in a sea of despair. Be hopeful, be optimistic. Our struggle of a day, a week, a month, or a year, it is the struggle of a lifetime. Never, ever be afraid to make some noise and get in good trouble, necessary trouble.”

Given the racial climate in this country, especially in recent months, and how black and brown people (especially men in particular) are being characterized by our current administration and in the media; I never thought that in 2020, I’d have to explain racism to my grandson and why it’s been allowed to continue. However, I told him that his life matters, has value, and prayed that he would not have to experience it on any level. By sharing this experience with him, I also wanted him to understand that it’s not about what you’re called, but what you answer to. Despite all that John Lewis endured throughout his life – from being severely beaten multiple times…to being jailed more than 40 times – he never allowed his mistreatment to deter him from fighting for equal rights for those who are marginalized in this country.

There’s still so much work to do and we must continue the fight for social justice and racial equality. Unfortunately, over time, our young black and brown men have lost sight of who they are and that their lives have value. It’s evident with the increase of black on black crime that we’re seeing continuously across our nation in many of our urban cities. Believe me I get it! Not excusing violence and murder on any level, it doesn’t help when the decks have been stacked against them dating back to slavery. Fast forward to today, sadly not much has changed. There are so many factors that attribute to this … years of systemic racism, inequities in hiring and wages paid, lack of training programs, racial profiling, brutality, and death at the hands of the police, disproportionate sentencing by judges, and the list goes on.

This is why it’s critical that as parents, we instill a positive and healthy image of our children not soon after they exit the womb. Let them know that they are loved and come from a rich heritage dating back to the cradle of civilization. It’s important to expose them to their history, which is an integral part of American history and that it’s not just celebrated during the month of February. It’s important to start reading to them at an early age. In order to help change the image of how our children and young people are viewed, we must lead by example and be the change that we want them to see.

In the words of the late, great abolitionist Frederick Douglass, “It is easier to build strong children, than to repair broken men.”

Race Relations in the Workplace ~ Why Are We So Afraid to Talk About It?
July 5, 2020

Dove Style Magazine’s (DSM) Editor-in-Chief Dana M. Hutchinson is a native Washingtonian and third-generation writer. She holds a Bachelor of Arts degree in Journalism and has over 30 years of experience in the publications industry. She’s no stranger to the magazine world having held several editorial positions on staff of Garden Design, Landscape Architecture, and Corrections Today magazines respectively. For 12 years she served as the Graphics and Production Manager for a Communications Department of a non-profit association where she was responsible for managing the design and production of multiple publications and marketing materials. She’s excited about returning to DSM as its Editor.

More Articles by Dana Hutchinson
Go to Top
Sign-up here and get DSM directly in your inbox.